Recycling is not all done by machinery. In fact, much of it still today is done by hand in what is referred to as a ‘picking room’. Waste is spilt onto conveyor belts to be sorted by people into the appropriate containers e.g. plastic, metal, cardboard etc. They are then effectively dispatched to appropriate recycling facilities.

This may be unpleasant work but it is highly essential and reputable waste companies provide the best possible working conditions - protective clothing, air conditioning and good ventilation to all of its workers.

The health problems associated with this work are mostly invisible - the mould spores of Aspergillus Fumigatus have been with us for years. The condition once known as farmer’s lung was a direct result of breathing these mould spores associated with decomposing vegetation such as you would find in compost heaps. Unfortunately, this mould spore is commonplace in the waste industry and particularly dangerous when in close contact with waste material such as sorting waste by hand. Aspergillus Fumigatus can cause a wide range of infections including chronic lung disease (chronic pulmonary aspergillosis) and life-threatening systemic infection that can involve multiple organs (Invasiveapergillousis) as it can affect the body’s immune system.

As in every case, disease prevention is better than cure so wearing masks and correct breathing equipment where appropriate combined with the best practice of ventilation and the correct use of DAX airscience will reduce the possibilities of being affected.

The other area of health risks in the waste and recycling industry is airborne VOC’s or Volatile Organic Compounds, but the list is almost endless. Formaldehyde, Methylene, Methane, Ammonia, Chloride, Ethylene, Tetrachloroethylene, Toluene and Butane are commonplace toxic compounds that workers may come into contact with.

The health problems associated with VOC’s are numerous: eye, nose and throat irritation, headache, nausea and lack of coordination. Prolonged exposure can lead to damage to the liver, kidney and the central nervous system - some are suspected or known to cause cancer in humans.

DAX airscience believes with our technology we can complement the excellent work now being undertaken by the waste industry itself and the Environmental Agency who is now assisting the waste & recycling industry in monitoring these health risks, particularly VOC levels in the workplace.

Part of the DAX airscience Technology known as PCO (Photo Catalytic Oxidization) will drastically reduce and help destroy bacteria, moulds and Volatile Organic Compounds such as Formaldehyde, Methylene, Methane, Ammonia, Chloride, Ethylene, Tetrachloroethylene, Toluene and Butane. These compounds are held together by carbon, carbon-oxygen or carbon based-hydrogen bonds, the PCO oxidizers destroy these bonds and fragment the molecule into smaller compounds which are broken down until only carbon dioxide and water are left.

The part of the DAX airscience Technology known as PCO (Photo Catalytic Oxidization) can also reduce particles down to 0.001 microns from the air including the very tiny lung-penetrating particles smaller than 3 microns. Whilst HEPA filters can help reduce airborne particulates most cannot remove particulates as small as 3 microns and all filters eventually get quickly blocked in polluted environments.

With DAX airscience PCO will reduce or destroy toxic gases like carbon monoxide and nitrous oxide, untouched by most other technologies!

DAX airscience technology cannot alone resolve these problems but when installed will complement and substantially improve the waste and recycling industry’s best practice in the workplace. 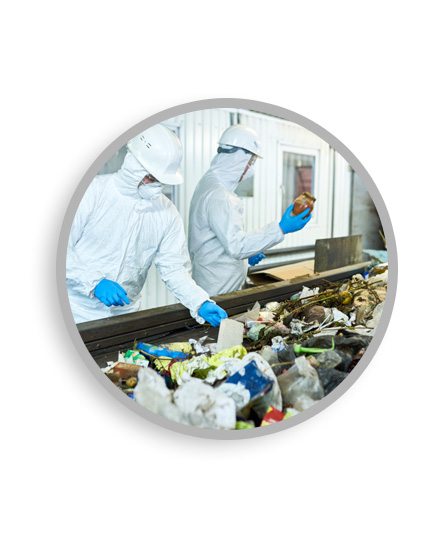