It is essential for all food processing facilities to manage risks from micro-organisms and cross contamination during food manufacturing and storage. Building fabrication, production equipment design and layout, combined with best practice during each operational, cleaning and hygiene process are essential areas highlighted in the BRC requirements.

High risk, high care and low care environments differ significantly from factory to factory, and while there are many shared practices across multiple food factories, experience has taught us that every site must be considered individually which is why we always offer a no obligation site survey.

DAX airscience provides units to cover wide open spaces, improving cleanliness and microbiological control. Additionally, odours are removed as is the need for cleaning chemicals and masking perfumes. Staff turnover and absenteeism are reduced by tackling surface and airborne bacteria and viruses. Regulations are complied with, while the units require minimal maintenance and do not interfere with everyday operations.

Our technology can be used in all areas of the food industry from slaughter to storage, ensuring a reduction in bacteria and providing infection control. 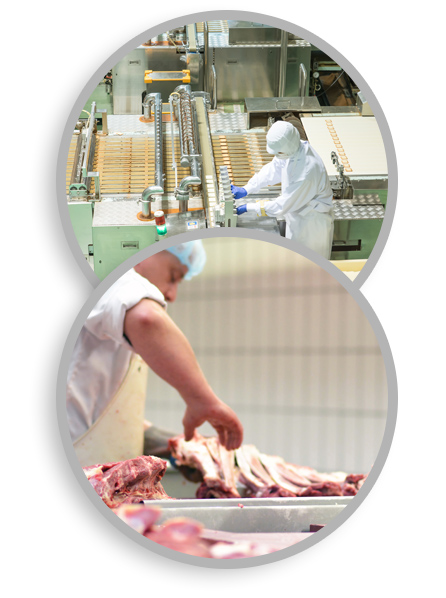 “This was another reason we elected to go with AIRsteril; chemical fogging makes the atmosphere damp which gave us a problem with our electrics. It also requires a complete plant shutdown and staff out of the facility and production downtime costs money”, said Stephen’s Gary Luff. “Not to mention the £1,000 per week we were spending on swab testing. Because AIRsteril works 24 hours a day it is constantly killing both airborne and surface bacteria. We consistently found massive reductions in TVC and were able to scale back the testing and saved on those costs as well.”
The technology was endorsed 100% by both the Stephen’s Fresh Foods Technical Team and their Directors.

"The UK banking centre at Canary Wharf is populated with modern skyscrapers featuring the latest in office building technology. The Credit Suisse UK HeadQuarters allows staff to make the most of windows which has meant that the main building services are sited in the middle of the building. As such with long air ducting, their luxury washrooms struggle to maintain air quality and a clean, fresh smelling work place.

They have installed AIRsteril for odour and infection control in their washrooms. Convinced that the bacteria and viruses that cause infections are killed by AIRsteril, the new offices will feature MF units to ensure staff absenteeism is kept to a minimum."

"On a Test Match day at Lord's there are 25,000 people, mostly males, spending all day watching cricket and drinking. With several visits per person during the day the gents toilets can have up to a 10,000 footfall a day. The staff have had difficulty in clearing the resulting odours. The stainless steel trough urinals in some of the washrooms create added problems.

Just in time for a major Test Match, AIRsteril WRX trial units were installed in two of the major washrooms. After just a few hours, the units had managed to get on top of the smell, then controlled the odours throughout the 5 day match. The facilities staff are very pleased and plan to increase the number of installations before the start of the next cricket season."